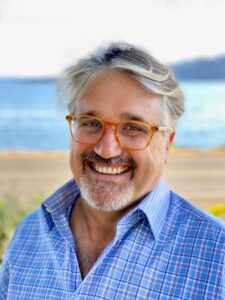 Steve Oshin spent twenty -three years in the radio business in Los Angeles and Seattle. Following his broadcast career, Steve transitioned into non-profit work raising money for Children’s Hospitals in North America. Steve and his team at Children’s Miracle Network raised over three-quarters of a billion dollars to help sick and injured kids. While working at Children’s Miracle Steve pursued a lifelong dream and returned to college to get his Master’s in Counseling Psychology. In May of 2020, he accomplished this goal. Today, Steve is a successful therapist living and practicing on Bainbridge Island in Washington State. He has been married to his wife Cynti for 38 years and has three beautiful adult children and one grandchild.