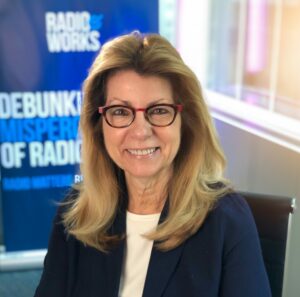 As President and CEO of the Radio Advertising Bureau, Erica Farber leads Radio’s advocacy efforts by helping to drive business, grow advertising revenue, and communicate Radio’s digital transition.
Farber joined the organization in January 2012, as Executive Vice President, responsible for membership, services and professional development. Most recently, she was the CEO of the radio consulting and Internet service provider, The Farber Connection LLC, a firm she founded in 2010. During her fifteen-year tenure at Radio & Records, Farber held various positions including COO, President, Publisher and CEO.
Farber has held nearly every position in Radio Sales & Management including rising through the ranks at the INTEREP Companies and serving as Executive Vice President/Radio Development Director. During the early years of her career she held positions at KRTH-FM, KABC-TV, and KIIS-AM in Los Angeles. Her radio management career grew quickly when she was appointed General Sales Manager and General Manager of WROR-FM in Boston in the same year. Her success then led to an appointment as Vice President/General Manager of WXLO-FM, In New York.
In 2000, Ms. Farber received an American Broadcast Pioneer Award from the Broadcasters’ Foundation and has consistently been voted one of “The Most Influential Women in Radio” by the readers of Radio Ink Magazine. In 2009 she was awarded the inaugural Trailblazer award by the Mentoring & Inspiring Women in Radio Group, a group she was a founding member of in its inception in 1999. In 2012 she was named one of the Giants of Broadcasting by the Library of American Broadcasting. In October of this year (2020), she received the National Service Award from NABOB, the National Association of Black Owned Broadcasters for her leadership and dedication to promoting diversity, equity and inclusion in the radio industry.
She currently serves as Chair of the Radio Creative Fund. She serves as a Director on the following Boards: Advertising Week, Broadcasters Foundation of America and the Library of American Broadcasting. She is also on the Alliance for Women in Media advisory board. Named to Nashville Leadership Music Class of 2020.